What does the Tongzhou district, the Beijing Municipal Administrative Center, look like now since construction started a few years ago? On Tuesday, a group of young people, including overseas students, influencers and media persons, stepped on a tour to experience the rapid green development of Tongzhou. 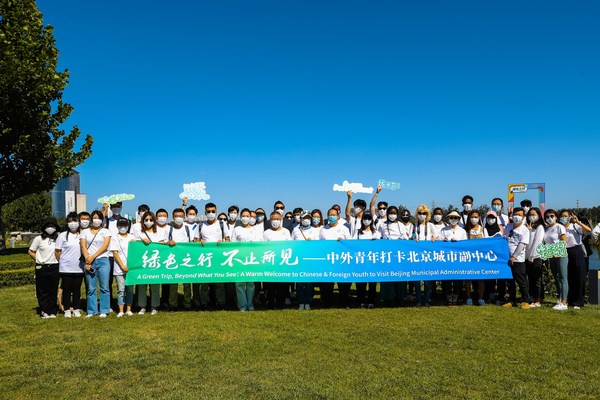 The “A Green Trip, Beyond What You See” tour Photo: Courtesy of the organizer

The park covers a total area of 11.2 square kilometers within the center’s core area. According to Yun Xiangjie, deputy director of the tourist service office at the Central Green Forest Park, the park presents “one core, two rings, three belts and five districts” in terms of its spatial structure. The entire park is focused on green coverage, which accounts for more than 80 percent of the area.

“The Central Green Forest Park implements green and low-carbon concepts and insists on solving ecological problems through ecological methods. The goal is to form a city zone with near-zero carbon emissions,” added Yun.

Gao Xiang, a representative of the construction company that is constructing the buildings, explained to the young people on the tour that the urban sub-center theater located along the Grand Canal is known as a “cultural granary,” while the urban sub-center library is located in the Sixth Ring Park. On the side of the “Forest Book Garden,” the Grand Canal Museum is a “canal boat” embedded in this new forest “sea.” In terms of carbon neutrality, the three major buildings all adhere to the green building concept of energy saving and emissions reduction.

The Zhangjiawan Design Town not only has a green landscape, but also is a pilot project for zero-carbon buildings. It is also positioned as an all-in-one design town, smart town and dynamic town.

At the “Green Finance” stop, Chinese and foreign youths took a bicycle tour pedaling their way through the Beijing International Fortune Center, the core area of the Canal Business District.

At the same time, the event also released an announcement for a short video collection “Green Trip, Beyond What You See: A Warm Welcome to Chinese & Foreign Youth to Visit the Beijing Municipal Administrative Center.” The submission period for video works is set to end on September 20. Outstanding videos will be selected for display and awards.