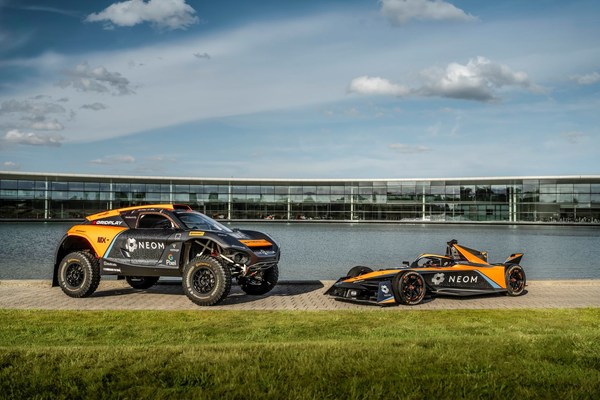 Commenting on the partnership, Nadhmi Al-Nasr, CEO of NEOM, said: “Our partnership with McLaren Racing complements NEOM’s commitment to driving sustainable solutions and tackling some of society’s most pressing challenges. The partnership will allow us to share our collective resources and experience to yield exciting results, not only for our own organizations, but also for the broader automotive and sports industries. NEOM is an economic engine for the Kingdom of Saudi Arabia and will be a hub for innovative businesses like McLaren Racing to conduct cross-industry research, incubate, collaborate and bring new technologies to the world.”

McLaren will collaborate with NEOM across multiple areas, becoming a founding partner of OXAGON, a city in NEOM set to be a blueprint for the future of advanced and clean industries and a hub for innovation. McLaren will be located within OXAGON’s Research and Innovation Campus, which is being designed by international architects, Grimshaw. The campus will provide cutting edge facilities and collaboration spaces, accelerating ideas from labs to market to develop industries and products of the future.

Zak Brown, CEO of McLaren Racing, said: “We are delighted to welcome NEOM to the McLaren Racing family. This is an incredible way to kick off our entry into Formula E and to unify our electric racing series. We are thrilled to introduce NEOM McLaren Electric Racing and to work with NEOM to nurture talent and drive innovation. Working with OXAGON will allow us to make meaningful contributions through our Accelerator program and assist with the development of advanced and clean industries.”

Additionally, through its bespoke Accelerator program, where performance-driven data can be translated into the culture and thinking of its partners, McLaren will lend its digital and analytical expertise as a technical partner of OXAGON’s advanced and clean manufacturing ecosystem.

A further significant element to the partnership will be rolled out during 2023 when, in line with NEOM’s commitment to developing Saudi talent, McLaren and NEOM will create a bespoke program to nurture engineers and students; Twenty Saudi graduates from NEOM’s Graduate Program will each take part in a one-year placement with McLaren Racing at the McLaren Technology Center in the United Kingdom. Entitled ‘The McLaren Way,” this performance and development program will help unlock the performance and potential of all NEOM teams through a range of initiatives.

The partnership is part of NEOM’s continued commitment to sustainable goals within motorsport across both Formula E and Extreme E, with both race formats competing in exhilarating racing across the globe. Building on the success of NEOM’s Mercedes-EQ Formula E principle partners relationship, NEOM McLaren Formula E Team will be formed through the acquisition of the Mercedes-EQ Formula E Team, expected to complete later this year, which will see the reigning champion team become part of the McLaren racing family.

NEOM was also the location for Extreme E’s second-season inaugural race which took place in February of this year. The race helped to raise awareness of the challenges faced by climate change as well as the need to continue developing sustainable motorsport technologies within the region.

The Kingdom of Saudi Arabia has invested significantly in motorsport platforms in recent years, with the Ministry of Sport signing agreements to host Formula E, Extreme E, Formula One and the Dakar Rally.

NEOM is an accelerator of human progress and a vision of what a New Future might look like. It is a region in northwest Saudi Arabia on the Red Sea being built from the ground up as a living laboratory – a place where entrepreneurship will chart the course for this New Future. It will be a destination and a home for people who dream big and want to be part of building a new model for exceptional livability, creating thriving businesses and reinventing environmental conservation.

NEOM will include hyperconnected, cognitive towns and cities, ports and enterprise zones, research centers, sports and entertainment venues, and tourist destinations. As a hub for innovation, entrepreneurs, business leaders and companies will come to research, incubate and commercialize new technologies and enterprises in groundbreaking ways. Residents of NEOM will embody an international ethos and embrace a culture of exploration, risk-taking and diversity.

McLaren Racing was founded by New Zealand racing driver Bruce McLaren in 1963. The team entered its first Formula 1 race in 1966, since then McLaren has won 20 Formula 1 world championships, more than 180 Formula 1 grands prix, the Indianapolis 500 three times, and the Le Mans 24 Hours at its first attempt.

McLaren was the first F1 team to be awarded the Carbon Trust Standard in 2010 and has retained it since on a bi-annual basis, most recently in February 2021. The team was also the first in F1 to be given the FIA Sustainability Accreditation Award at a three-star level in 2013 as part of the FIA Environmental Certification framework, before becoming a signatory to the UN Sports for Climate Action Commitment in 2021.

This material is distributed by Teneo Strategy LLC on behalf of NEOM Company. Additional information is available at the Department of Justice, Washington, DC.