SUWON, South Korea, Sept. 22, 2022 /PRNewswire/ — Gyeonggi Province, together with 30 of its cities and counties and the Gyeonggido Assembly, declared that they will jointly strive to realize a “carbon-neutral Gyeonggi” that does not emit greenhouse gases by 2050.

At ECO FAIR KOREA 2022, held at the Suwon Convention Center in Gyeonggi Province on September 5, Gyeonggi Province Governor Dong Yeon Kim declared the establishment of a carbon-neutral promotion system and cooperation and took part in a signing ceremony.

Governor Kim said, “We will reduce greenhouse gas emissions by 30 percent by 2030 and smoothly achieve carbon neutrality without greenhouse gas worries by 2050 so that future generations can feel the seasonal changes, better handle various climate disasters and lead happy lives.”

He continued, “We will strive to ensure that the development of various technologies such as new and renewable energy sources will become a new driving force with the benefits evenly distributed to the residents of the province.” He stressed, “We will form a special committee on climate change and ensure that it can work comprehensively with stronger plans and impetus than any other committee. Gyeonggi Province will take the lead and spearhead the tackling of climate change.”

The declaration includes a) efforts to dramatically reduce greenhouse gas emissions through the transition to new and renewable energy sources reflecting geographical and social characteristics; b) efforts to promote various policies such as an expansion of green buildings, a green transition of industry, an expansion of the supply of eco-friendly vehicles and filling stations, promotion of welfare for the energy-vulnerable, and an expansion of carbon sinks such as carbon-neutral forests; c) efforts to organize the Gyeonggi-do Carbon Neutral Council and secure joint financial resources to realize carbon neutral policies through a fair transition; and (d) enhancement of administrative and financial support for the smooth implementation of carbon-neutral policy.

This declaration is particularly significant in that it emphasized cooperation between regional and local governments for the first time in Korea.

“Gyeonggi Carbon Zero Go,” one of the ECO FAIR KOREA events, took place for the second time since last year to foster a carbon-neutral atmosphere in Gyeonggi Province and enable discussions on carbon-neutral practices; 53 organizations and 70 booth operators joined the event, providing an opportunity to build a consensus on carbon neutrality. The Carbon Neutral Declaration Ceremony, in which the provincial government, cities and counties of the province, and the Gyeonggido Assembly reinforced their will to cooperate, was followed by the launching ceremony of the provincial carbon neutrality promotion group through which Gyeonggi residents will proclaim the implementation of carbon neutrality.

At the same time, an international forum on carbon neutrality was held with the participation of East Asian government officials and experts to discuss the roles of local governments in cooperation among Korea, China, and Japan, and a competition for carbon neutral ideas took place to raise awareness of and build consensus on climate crisis issues by fostering ideas in the fields of air, climate, and energy.

The Gyeonggi Provincial Government and the Gyeonggi Environment and Energy Promotion Agency will review the grand prize-winning “King of Climate” team’s campaign idea of displaying energy usage volumes on lease buildings and apply this idea to relevant policies.

The Clean Air International Forum, co-hosted by Gyeonggi Province and the United Nations Environment Programme (UNEP) since 2018, was attended by 750 environmental experts from 16 countries as well as those from international organizations, governments of six Asia-Pacific nations, and academia, including Tudevdorj Gantumur, Deputy Minister of the Environment and Tourism of Mongolia, and Abdullah Naseer, Minister of State of the Ministry of Environment, Climate Change and Technology of the Maldives. They attended the three-day event online or offline. 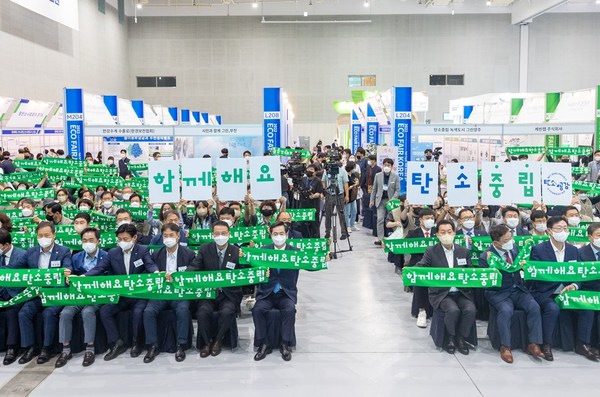